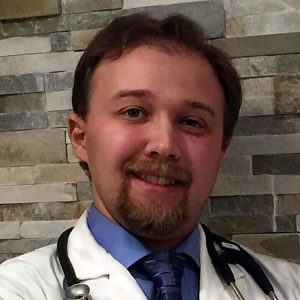 We are speaking with Dr. Robert Press, DC, and how his use of chiropractic techniques helps his patients with chronic pain.

I had the pleasure of evaluating John, a 50 year old male patient who presented with a 3 year history of right shoulder pain. John explained that he has practiced martial arts since he was a child and has suffered numerous injuries, including a torn rotator cuff muscle, although he could not recall if it was right or left since it had healed approximately 10 years ago.

John, a small business owner, spent a large portion of his day sitting at a desk in front of a computer. Initially he did not experience pain, but after some time sitting still, he experienced pain in the shoulder when moving it at all. Sleeping on his right side or when attempting to lift his shoulder above 90 degrees – either forward (flexion) or sideways (abduction) – caused shoulder pain. Interestingly, John stated that when he warmed up for martial arts, he did not feel much pain in the shoulder.

Previously, John had seen another chiropractor who had applied electric stimulation to the shoulder and had used spinal manipulation on the mid back but the treatments had not made any significant difference.

John sought me out because of my rehabilitation background, believing that an active approach would be preferable.

Describe Your Assessment of Shoulder Pain

When I evaluate shoulder pain, the first thing that I pay attention to is upper body posture. In this case, John’s upper body musculature was extremely well developed, but he had a significant forward rounding of the shoulders and protracted head. This posture is called Upper Crossed and is related to the Upper Crossed Syndrome described by Czech Physician, Dr. Vladimir Janda. This postural imbalance involves:

How Did You Determine the Diagnosis of Shoulder Impingement Syndrome?

My suspicion was confirmed when I asked John to sit up as straight as possible, pull the shoulder blades together and down and then try to lift the shoulder. This immediately relieved most of his pain when moving his shoulder.

How Did You Arrive at Your Course of Treatment?

Through the physical examination and posture assessment, I determined that John was experiencing Shoulder Impingement Syndrome due to malpositioning of the shoulder blade as a result of his upper body posture.

What Modalities or Therapies Did You Implement for Shoulder Impingement Syndrome

The treatment plan for John’s shoulder included manual therapy and therapeutic exercise. In order to improve functional range of motion of the shoulders and to decrease the forward rounding of the shoulders, I used a muscle technique called Pin-and-Stretch to lengthen the following muscles on both sides:

I then instructed John in stretching exercises for the pectoralis muscles and the subscapularis muscles, and then taught him how to activate the shoulder blade stabilizer muscles of the back.

What Was the Outcome for His Shoulder Pain?

After the first treatment session, John noted that his shoulder pain was already 50% better and he could raise the shoulder above 90 degrees without pain.

I saw John three more times over the next month at a frequency of one visit per week. We continued working on the same muscles. When the exercises I gave him became easier, I added a red and then green resistance band to increase the difficulty.

After the fourth visit, John’s pain was effectively resolved. To prevent this problem from recurring – due to the nature of his work and his choice of sport (martial arts) – I explained to John that he would need to continue to use the exercises I had taught him. He was all for it.

Why and When Did You Choose the Holistic, Integrative, or Natural Health Path?

I decided to pursue a career in chiropractic medicine, at least in part, because my father, Dr. Stephen J. Press, was a very prominent chiropractic doctor who founded the International Sports Chiropractic Federation (FICS) and was the chief doctor for the Soviet Olympic Team in 1992. Growing up with a chiropractic background certainly influenced my decision to go into this field.

What Lessons Have Your Work and Professional Experiences Taught You and What Has Been the Affect on Your Lifestyle?

The biggest lesson I’ve learned is not to surrender my clinical judgement to others. If something doesn’t feel quite right, it probably isn’t.

Dr. Press graduated from New Jersey Institute of Technology with a Master of Science in Computer Science in 2007

He completed a fellowship in research where he served as both the Spinal Morphometry fellow and a research assistant.

Dr. Press is certified as a Corrective Exercise Specialist (CES) by the National Academy of Sports Medicine, and incorporates movement assessment and functional movement therapies into his practice.